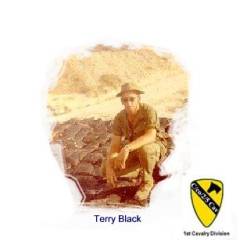 This story is not about blowing things up or about killing things. This story is about people helping people. It took place in August or September of 1969.

It started out as an uneventful day.  The temperature was in the low 90’s; the humidity was in the upper 90’s with a haze in the air that hung like a wet poncho liner on everything; and the mosquitoes were doing their thing, as usual.

We were working in platoon size; somewhere outside Song Be or Phouc Vinh I don’t remember which; when a small boy and an old man walked up to the Kit Carson scout (Butterfly was the scout’s nickname) and me; and started conversing in Vietnamese. The boy was probably 7or 8 years old; he was covered in mud; and you could tell he had been crying. His little face was tear streaked and eyes red; and he looked like he had lost his best friend. The old man was the boy’s grandfather and was very excited. Now the Kit Carson scout  (Butterfly) was young.  Maybe 15 or 16 years old at the most; and he was easily excited and nervous; and fluttering around like a butterfly; thus the nickname Butterfly! I asked Butterfly what was going on.  In the meantime, some of the troops started gathering around to see what was up.  The old man said, (as interpreted by Butterfly) his cow had fallen down a well! He needed help getting the cow out of the well and wanted to know if we would help!

This was definitely above my pay grade; so we went and found the LT.  (Webmaster note:  Pronounced El Tee.  The letters LT are the abbreviation for Lieutenant.)   Now the LT (sorry I don’t remember his name) was an opportunist.  He decided this was a good opportunity to make brownie points with the locals. (That’s why he got the big bucks!)   The LT grabbed the handset from his RTO and was explaining the situation to someone on the other end of the radio. His eyes lit up; and the next thing we knew, we were following the old man and boy through waist high grass in an open field (which made all of us pretty nervous).

We hiked a few hundred meters (as I remember) when we came up to a hole in the ground; and sure enough, there was a cow in the bottom of this well! The poor thing had backed up and fell in to the well; butt first.  This old cow was not in the best of moods and was down about 10 to 15 feet.

Now the problem was ‘how do you get an 800-pound cow out of a well with out hurting it?’  Someone suggested a frag, which drew some hard looks from the LT.  Then the LT looked straight at me and said, “you got the rope?”  (The rope is another story in itself).  We had crossed a river using this rope; and to make a long story short, I was stuck carrying a 100 feet of 1/2 inch rope which hung up on every piece of brush in South Vietnam.  The rope was my nemeses. I hated that rope!  One day, there had been a great fire, the rope was too close; and the rope was lost!  Well, I looked the LT straight in the eye and said: “No sir, it was lost!”  Well, the LT was not a happy camper!  He grabbed the handset from the RTO and started talking to someone on the other end.  Whoever was on the other end of that radio decided we needed a slick (Huey) to lift that poor cow out of the well!

The LT came up with a game plan we all agreed.  We would take a strap from the slick and put it around the cow; and use the slick to lift her out!  We all agreed; that is, except the cow! She was cold, cramped, and tired; and not in the best of moods.

Well the slick came in and set down.   The noise was driving the cow nuts.  A brave trooper decided he would be the one to put the strap around the cow!  He should have asked the cow what she thought!  We started lowering the trooper down the well.  The cow got one whiff of him; and went berserk!  We quickly pulled the trooper up out of the well.  So there we were.  A Slick on the ground; and a platoon of troops standing around.  We were all sitting ducks!

Then someone said sarcastically “let’s throw the kid in the well!”  That’s the only thing that made sense.  The cow knew the boy!  What an idea! So we lowered the boy down the well; and the cow was still acting up.  The boy started to speak to her in Vietnamese, and the cow settled down.  He put the strap around her and we pulled him up; cow and all, out of the well.

The slick hovered over the well; and we hooked up the strap.  The cow went berserk again!  The slick started lifting; the strap went taunt; and the cow started coming out of the well.  The strap slipped up around the cow’s head and front feet!  Imagine being that pilot, with an 800-pound cow hanging from the bottom of your chopper?  The cow was flailing her hind legs like crazy; and almost kicked the LT.  The chopper was bouncing all over the place; and we were trying to get out of the way.  Dirt and dust was going everywhere!  The poor cow was being hung; the strap slipped up around her head and neck!  Finally, the pilot got the cow out of the well and on the ground.  We ran to her, trying to get the strap off her.  The little boy beat us to her. He got a rope around her neck.  The last we saw of the boy and the cow, the cow was dragging the boy through the brush!

You have to understand.  By Vietnamese standards, this cow was the lifeblood of this family.  This is how they made their living; and probably their only real possession.

Well, the LT got his glory; and the old Vietnamese man got his cow back.  The village well was saved from contamination; and us troops; well, we got the feeling that we did a something good!

This story is told to the best of my recollection as it happened over 30 years ago; and my memory isn’t what it should be.